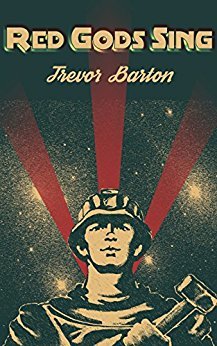 In “Red Gods Sing (Brobots, Book Two)” by Trevor Barton, “The Singularity” is a upon us. Having just finished Brobots, Book One I still had a familiarity of the characters and story. In the first book we are introduced to the brobot community and their fight to be recognized as  individuals. There was a lot of humor and high jinx…book two is darker, a lot more serious and much more political. (Not to worry, there is still plenty of dry comic relief). If not for the fact it’s taking place in the 2060’s you’d think you were reading about the political climate in the United States today. Fake News abounds and there is corruption and defilement of the highest degree. In this episode we are doing a bit of space travel to Mars, all the original characters and a few new ones will have you entertained and wanting more. Gay or straight, robot, human, AI and alien alike will be in awe of the brilliance that is Trevor Barton, who is quickly making it to the top of my favorites list. So looking forward to the next installment.

They’re easy to treat like trash. But they’re not so easy to ignore; especially the ones experiencing “the wake up.” The idea was that they could work hidden in society’s plain sight, allowing humanity time to get used to the fact of sentient machines.

But it’s all too easy for others to take advantage of those who live on the edge. What they, and their allies, must do is work out who, and why, before it gets too late.

Plug them in. Wish they never end.

You’re a robot man living in 2060’s America. You’re off on a hot date. Forget fake news and flying saucers. What’s the one thing you should’ve packed?

Josh could be forgiven for being a little forgetful. In his world, the problem isn’t with AI. It’s with humans. (Some of them, at least.) A threat is looming, and with it an ultimatum. Brobots like Josh can rise up. Or they can face extinction. Josh has decisions to make. But where will they leave a post-singularity world?

I'm just a reader with something to say about the books I read. View all posts by booksinmylibrary

I will do my best to be honest and fair in all my reviews. I understand the importance of reviews to authors and as a reader I am aware of how reviews can sometimes be judged unfairly on some sites. I am an avid reader of Fiction and am always on the lookout for new Indie Authors to read.